Catholic Foundation for Brooklyn and Queens

Catholic Foundation for Brooklyn and Queens provides financial grants and other assistance to institutions and ministries of the Diocese of Brooklyn in support of the Church's mission in Brooklyn and Queens, and administers the endowments and other funds entrusted to it. The Foundation is guided by principles of prudent stewardship while assuring that all investments are consistent with Catholic teachings.

Legal name of organization: Catholic Foundation for Brooklyn and Queens 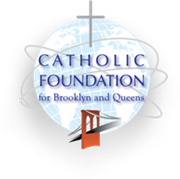 This organization is not required to file an annual return with the IRS because it is a church.

For over 150 years, the Diocese of Brooklyn has embraced and celebrated the diversity of its communities, families, and faithful. Generations of Catholics have been raised in our tight-knit neighborhoods, celebrating their Catholic faith at our many parishes, and building our church for the future. We have been richly blessed. With those blessings comes the responsibility to share with future generations all that we have received. Generations of Faith, the capital campaign for the Diocese of Brooklyn and Catholic Foundation for Brooklyn and Queens financially supports parishes, provides assistance to elderly and ill priests, and supports youth evangelization and youth ministries.

The Catholic Foundation for Brooklyn and Queens wishes to enhance the present and future mission of the Catholic Church by reaching out to the multi-cultural youth of our Diocese through effective and comprehensive youth ministry.

Our goal is to provide each parish with the resources, training and funding to engage our young people and help encourage them to consider becoming active, practicing Catholics who will one day lead and serve our beloved Church.

By pledging financial support in favor of Youth Evangelization, donors can help secure the future of the Catholic Church in Brooklyn and Queens one pew at a time.

Through our funding of Catholic Migration Services, the Catholic Foundation for Brooklyn and Queens is committed to empowering underserved immigrant communities who are writing the next chapter in the history of our communities and our Diocese. The funding provided by the Catholic Foundation for Migration Services provides comprehensive pastoral, educational, advocacy and legal services to advance equality and social justice in a changing and diverse population.

The Goals
The boroughs of Brooklyn & Queens together account for over two-thirds of New York City’s immigrant population. With offices in both Brooklyn and Queens, Catholic Migration Services is strategically located to assist those that need our assistance most, while promoting lay leadership in the church and sponsoring most of the multi-lingual Masses in the Diocese. Home to some of the country’s largest immigrant populations, the boroughs of Brooklyn and Queens are well served by the church, but more can be done with your help.

Workers Rights Hotline – $500
Provides a call center for up to 90 calls per month for workers to learn about their labor rights and report abuses.

DeSalesMedia Group, the technology and communications arm of the Diocese, is the first such entity formed by a Diocese in the U.S. Named for St. Francis de Sales, the patron saint of writers and journalists, DeSales delivers Catholic news, information, entertainment and religious programming across all media, and aims not just to entertain and inform, but to also inspire and strengthen faith.

Newspapers
DeSales’ publishes a weekly Catholic newspaper, The Tablet, which covers local and international news from a Catholic point of view and has been serving the people of Brooklyn and Queens since 1908. With thetablet.org, and a daily headlines email newsletter, the newspaper now transcends its borders and serves a national and international Catholic readership.

DeSales faithfully serves the large and growing Spanish-speaking Catholic population in Brooklyn and Queens with Nuestra Voz, the monthly Spanish-language newspaper, and Tu Fe Al Dia, a weekly Spanish-language program on NET TV focusing on what the Catholic faith means in the everyday lives of the Hispanic community in Brooklyn and Queens. With 101 of its 189 parishes celebrating Mass in Spanish each week and a constituency that is 55% Spanish-speaking, DeSales is dedicated to continued evangelization and service to this important group in the Diocese of Brooklyn.

Educational Resources
DeSales also includes the Catholic Telemedia Network (CTN), which has been serving the educational and spiritual needs of the children in the schools and academies of the Diocese of Brooklyn for 50 years.

Each year, Catholic Foundation for Brooklyn and Queens awards grants to the various ministries of the Diocese of Brooklyn, which advance the mission of the Foundation’s Core 8 Endowment Funds. We are pleased to announce that we have awarded a total of $1,611,368 in grants for the 2017/2018 diocesan fiscal year. See below examples of those currently benefiting from our grant program.

Start An Endowment Fund
An immediate gift of $10,000 or more, in the form of cash, securities, life insurance or real estate, allows you to create your own endowment fund quickly and easily. We will prepare a simple agreement that specifies how you wish the endowment to be named and how the income will be used.

You, and others, may add to the fund at any time. Many people like to make contributions in honor of birthdays, anniversaries or other special occasions.

Endowment Fund by Request
Some people prefer to make their largest gifts through their will. To ensure that your charitable wishes are fulfilled, you may establish an endowment agreement early, and then allow the endowment to be funded later by your bequest.

We recommend that you consult an attorney or financial advisor for assistance in making a gift by a will.

Tax Advantages
Whichever way you choose to establish an endowment fund with the Catholic Foundation, your contributions will qualify for the maximum tax deductions allowed by law.

Catholic Foundation for Brooklyn and Queens

Board of directors
as of 02/11/2022
SOURCE: Self-reported by organization
Board chair

Vicar for Development Diocese of Brooklyn