The ACPMP Research Foundation is an IRS-designated 501(c)3 charitable organization. The Foundation was created in 2008 by a community of individuals affected by Pseudomyxoma Peritonei (PMP), Appendix Cancer, and related Peritoneal Surface Malignancies (PSM). Prior to the formation of ACPMP, no centralized organization existed that was dedicated to raising funds for distribution for PMP and appendix cancer research in an objective way. Private donations for PMP and appendix cancer research were primarily made to individual doctors rather than towards competitive, RFP-driven funding based on the quality of the science. ACPMP was created to fill this void and provide funding for research and educational programs focused on these diseases.

Appendix Cancer / Pseudomyxoma Peritonei Research Foundation (ACPMP) is dedicated to funding promising research for the diagnosis, treatment, and cure of appendix cancer and pseudomyxoma peritonei (PMP). The ACPMP Research Grant Program is administered by the National Organization for Rare Diseases (NORD). Grant recipients are selected by the NORD Medical Advisory Committee (https://rarediseases.org/about/leadership/medical-advisory-committee/). Information and application forms for the ACPMP Research Grants available through NORD are available on the ACPMP or NORD website (rarediseases.org or acpmp.org). Questions or requests for application forms may be directed to (800) 999-NORD or research@rarediseases.org. Click here for more information: https://rarediseases.org/for-clinicians-and-researchers/research-opportunities/requests-proposals/

The ACPMP Research Foundation provides physician scholarships to medical conferences to enable young physicians to learn more about PMP and Appendix Cancer and their optimal treatment.

The ACPMP Research Foundation plans, coordinates and sponsors educational events targeted to physicians and patients to enable these populations to learn more about Pseudomyxoma Peritonei and Appendix Cancer.

Each two-year grant is $50,000, administered by the National Organization for Rare Disorders.

Physician/patient symposiums are held in partnership with specialist institutions.

(1) Raise funds through events organized by the patient community.
(2) Partner with physicians and their institutions to facilitate the education of the medical and patient communities and improve the diagnosis and treatment of PMP.
(3) Partner with the National Organization for Rare Disorders (NORD) to administer the Research Grant Program to ensure funds are going to the highest and best use and to monitor usage of funds after grants are awarded.

The organization is composed of a volunteer board, with each member taking responsibility for a core area (Fundraising, Education, Research, and Communications). Fundraising is primarily achieved through a web-based platform that allows the patient community to set up fundraising events and collect donations. The organization also has two full-time staff members.

Progress is achieved with each grant issued by the organization and the corresponding research that is produced by the grant recipients. Progress is also measured in the number of education events sponsored and medical event scholarships issued.

ACPMP Research Foundation has awarded $1,300,000 in the form of twenty-seven research grants since 2008 that have resulted in 17 published studies in peer-reviewed journals, with another $100,000 to be issued at the end of 2020. We have co-hosted and sponsored annual patient-physician symposiums from coast to coast across the United States, and awarded physician scholarships to major international medical and scientific conferences focused on the understanding and treatment of appendix cancer and PMP. We will continue these efforts as we pursue our goal of finding a cure for every patient diagnosed with appendix cancer and/or pseudomyxoma peritonei. 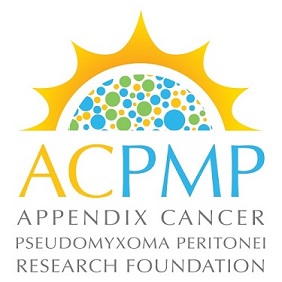