To build a movement for gay and transgender (LGBT) justice from within the Black church by engaging a national conversation and public consciousness on LGBT justice within the African American community.

The Black religious community—with its historic commitment to freedom and liberation—is perfectly suited to forge a new path toward freedom and justice for gay and transgender (LGBT) people and their families. When the Black community lives into wholeness, with no-one left out or marginalized, such full expression of community will have broad impact throughout the country.

We see great hope in the many religious people who desire change. Yes, we face daunting challenges: Black LGBT people and their families are disproportionately affected by violence and discrimination in every aspect of their lives, and many Black religious people—LGBT or not—are trapped by outdated teachings. Those who long for change are still silent.

With major investments, however, our roadmap is not only ambitious but achievable. Black communities will come together, share their lives, recognize their connections, and once again step forward to advocate for justice for all people. Many Voices is well respected within the LGBT movement and among Black social justice ministers who stand ready to move this agenda forward. 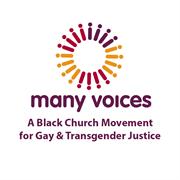 By 2018, Many Voices will create a national Black church movement for gay and transgender justice by integrating the concerns of LGBT people and their families with the African American church’s historic commitment to freedom and liberation.

Many Voices achieves its mission through:

a. Community dialogues on theology and human sexuality issues for faith leaders, congregations, seminaries, church leadership, educational institutions, and concerned individuals in public and private settings. Many Voices partners with academics, theologians, church leaders, advocates, and movement leaders to facilitate these dialogues across the United States.

b. Multimedia campaigns that raise the visibility of Black LGBT and supportive non-LGBT personal stories. Videos and other multimedia are disseminated across our comprehensive social media network and email communications.

d. Advocacy that includes online campaigns and grassroots community outreach. We activate our online membership and the public around justice issues that affect Black communities. We provide local training programs to expand our network and bring dialogues to communities across the United States.

Many Voices humanizes the issue by bringing forward the voices of Black LGBT people, who have been all to invisible in our community; and creates a bridge for religious leaders to the social justice issues that they already work on--poverty, employmet, health, incarceration, and others--all issues that disproportionately impact Black LGBT people and their families.

Ultimately, working with Many Voices, people come to see that LGBT people are part of our churches and communities and have been all along, that they are not extraneous or foreigners to us, that they're our sisters and brothers, and that they're hurting and being harmed.

Such new understanding removes the obstacles for Black Christians, expands their grasp of the issues, and fortifies them to step forward on LGBT justice in an increasingly public way.

Our 5-year strategy:
1. Activate a national grassroots network in target regions of the United States.
Many Voices will connect African American faith and secular groups by setting up regional Faith Councils to build a strategic volunteer network. In collaboration with state equality organizations and other partners, the network will engage with NAACP and other civil rights organizations, Black church denominations, and HBCU's. Through grassroots outreach, Many Voices' expert trainers will provide educational programs, dialogues, and trainings in each region and increase dialogue and awareness about LGBT justice human sexuality issues, and theology.

2. Expand Black Americans' public support for LGBT justice to be holistically favorable of gay and transgender people and their families.
With a national grassroots infrastructure within major African American academic, advocacy, and religious spaces across the U.S., we will lead and coordinate a national dialogue that focuses on amplifying and shifting Black public opinion on issues of morality and the diversity of human sexuality and gender, and connecting support for LGBT justice with the many justice concerns facing the Black community.

3. Sustain ongoing educational and media campaigns to increase the perceived friendliness of African American churches toward LGBT people.
According to one survey (PRRI), only 31% of Americans view Black churches as friendly toward LGBT people. Yet while 35% of Black Protestants said they favor marriage equality, for example, only 8% said that their own church family favors it. Such perceptions--that people in Black churches are more oppositional than they really are--make people less likely to improve the lives of Black LGBT people and their families.

Many Voices is
1. Strongly positioned as a respected and reliable partner among movement leaders who consistently ask us, “Who should we talk to? How shall we talk with them? What we’ve tried in the past has not been effective.”

2. Trusted by stakeholders -- Black LGBTQ people and religious leaders – to make clear the social justice connections to LGBT lives, to bring new perspectives and healing, and to offer a vision of the beloved community.

3. Known to be creators of inspiring programs and worship services as well as sound, comprehensive, and accessible online and print resources—all grounded in the Black church tradition.

4. Proficient at lifting up the unheard stories of Black LGBT people of faith—both LGBT and non-LGBT.

In 2014 we’ve begun to scale up our programming by creating a Many Voices faith council in North Carolina. Right now, we are building partnerships in priority cities and offering in-person education programs and webinars to North Carolinians. We are also amplifying the voices and stories of black people of faith (straight and LGBT), through videos and other multimedia that’s published across our online platform. Over the next five years, the work in North Carolina will be expanded across the southern region, and other states and regions across the country.

Board of directors
as of 10/13/2016
SOURCE: Self-reported by organization
Board chair

Office of Audit Remediation of the U.S. Coast Guard