Our mission is to work with the City of Kenosha Department of Public Works, Parks Division, and the Historic Planning Commission as a U.S. non-profit organization, in order to promote the restoration, preservation, beautification, and utilization of lakefront parks and structures beginning with Southport Beach House & Park; to raise awareness of the historic, cultural, and educational significance of these community resources. Goals 1. Share information and engage stakeholders and the public in the restoration and preservation process 2. Identify and acquire funding sources 3. Contribute to sustainability and economic development Southport Beach House is listed on the National Registry of Historic Places. 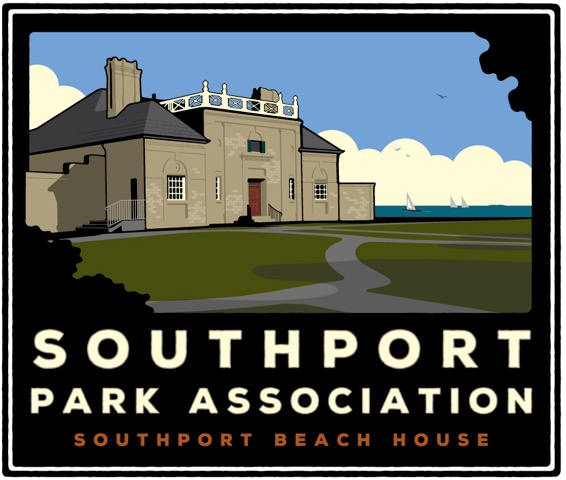 Memorandum of Understanding w/City of Kenosha

In May of 2012, the fate of the historic Southport Beach was uncertain. The building, a state and national registered landmark, suffered damage from a freak storm the previous summer that devastated the entire coastline of Kenosha. The microburst felled 70 trees in Southport Park Alone, and 700 trees across Kenosha primarily on the coast. It did some damage to the slate roof on the east side of the beach house that required temporary repair before the winter. After a lengthy city-wide clean up the question before the mayor was whether the historic building should be torn down, partially restored, or fully restored.

A study of the building was prepared by a prominent Milwaukee architectural firm and presented to the Parks Commission in May of 2012. A group of then unincorporated community activists urged citizens, who overwhelmingly supported renovations, to make their voices heard in the city hall and city council. Through petitions, informal surveys, numerous council meetings, and social media, we persevered. As a result of citizen efforts and the actions of city aldermen, a Master Plan for all of Southport Park’s 29 acres was then created. It was determined that a complete and total restoration would cost approximately $3 million dollars, but work could be spread out over 10 years while increasing usage to help pay for renovations. Then Mayor Keith Bosman appointed 8 citizens to the The Southport Park Commission to look at how the city could increase usage of the beach house, and the commission presented their findings to the Parks Commission seven months later. In November of 2014, the Southport Park Association (SPA) was created by community volunteers who applied for 501(c)3 status.

Our current mayor, John Antaramian, has provided funding for the deferred maintenance of the exterior of this historic structure. The city budget for 2018 has $1 million dedicated over 5 years for the restoration of the exterior of the building. In June 2017, a partnership between the that City of Kenosha and Southport Park Association was created so that SPA could secure financial support to supplement additional $2 million needed to fully restore the beach house. This memorandum of understanding (MOU) was necessary as Southport Beach House and Park are owned by the City of Kenosha while Southport Park Association is a private nonprofit organization. Our mission is to work with the City of Kenosha Department of Public Works, Parks Division, and the Historic Planning Commission as a U.S. non-profit organization, in order to promote the restoration, preservation, beautification, and utilization of lakefront parks and structures beginning with Southport Beach House and Park and to raise awareness of the historic, cultural, and educational significance of these community resources.


Southport Beach House is part of our heritage. Imagine its beautification with new windows, doors, lighting and the potential to be used for new purposes while retaining its historic features. You can support Southport Park Association by sharing your voice, your time, your talents and contributions to ensure our unique historic structure is preserved and enjoyed by future generations. Your contribution will help solidify our communities past and strengthen our future. Preservation will help create a vibrant, cultural coastal destination that will draw tourism, festivals, and other activities which in turn draw investment, revenue, and economic growth.

Vision
The Southport Park Association envisions a lakefront park system that extends throughout the City of Kenosha and links to the Chiwaukee Pairie State Natural Area to the south. Our efforts in the Southport Park are intended to extend and enhance community engagement within and throughout Kenosha County’s Lake Michigan public shoreline spaces.
Goals
1. Preserve, restore and enhance historic and environmental coastal assets
2. Contribute to sustainability and economic development
3. Identify and acquire funding sources
4. Share information and engage stakeholders and the public in the restoration and preservation process
5. Continue environmental educational programs within the park

SPA 2020-2023 Objectives
Southport Park Beach House and Park Landscape
• Work with City of Kenosha to develop requests for proposals for implementation of an
operating plan based on public/private partnerships as proposed in the 2017 Utilization
and Design Recommendations report.
• Review the current MOU with the Administration to determine if revisions or updates are
warranted at this time.
• Begin discussions relative to overall planning for Southport Park, including landscape,
activities, and hardscape upgrades with City Administration and members of the
Common Council.
• Discuss fundraising objectives for SPA toward improvements to the Beach House and the
Southport Park with City Staff and elected officials.
Fund Development
The SPA comprehensive fundraising plan for 2022-2023 includes the following goals:
• Establish specific fundraising goals and objectives
• Create organizational structures and an internal grant-writing team
• Develop communications tools for outreach to potential partners and cultivate expanding
donor participation
• Create a donor prospect plan to identify potential financial partnerships, including
individuals, businesses, and foundations
• Expand our base of organizational, institutional, and citizen support to leverage our fundraising efforts.
Public Relations
• Continue efforts to raise awareness of SPA’s mission by utilizing social media and local
media outlets like the Kenosha News
• Create a SPA public relations and marketing calendar for social medial posts, newsletters
and fundraising campaigns
• Update our marketing tools such as Facebook page, newsletter, and event
advertising.

Our ability to form strong partnerships and collaborative efforts help us to meet our goals.

In 2011, after major storm damage to the roofing and other structural elements of the Southport Beach House, the City of
Kenosha began a public hearing process to ascertain the community’s vision for the future of Southport Park and the historic
beach house in order to guide design, planning, and investment in the park. In 2013 the Common Council amended the
Kenosha Comprehensive Plan, adopting a Master Plan for Southport Park.
The Southport Park Master Plan (SPMP) envisions improvements to the historic beach house and park landscape. It calls for a public-private partnership between the City of Kenosha and the citizens of Kenosha, working jointly to realize this vision. Over the past decade local historic preservationists have worked with the City of Kenosha , encouraging repairs to the damaged exterior surfaces, installation of historically appropriate replacement windows, remediation of structural damage; as well as upgrades to the slate roofing.
The Southport Park Association was established in 2014 , as a 501 (c)(3) non-profit organization, in order to formally engage local citizens and to develop private support for improvements throughout the park.
The City of Kenosha and the Southport Park Association entered into a Memorandum of Understanding (MOU) in 2017, formalizing the public-private partnership envisioned in the Master Plan.


SPA's Organizational Strengths
• Positive community relationships with citizenry, notably the adjacent Southport
neighborhood, other non-profit organizations and across units of government.
• Positive relationships with the City of Kenosha, including the Administration, Common
Council, Department Heads, and City Staff.
• Recent community successes with historic preservation projects in downtown Kenosha
and Simmon’s Island Park have bolstered the credibility and value of continuing
expansion of local preservation efforts. Over the past 5 years there has been a significant
increase in private sector investment in the rehabilitation of older structures in Kenosha’s
historic downtown, and growing support from the business community in general.
*Connecting our city government with grant funders.

SPA BOD entered into a Memorandum of Understanding (MOU) with the City of Kenosha in order to establish an effective partnership for design, planning, and budgeting of public improvements and private contributions to the revitalization of the Southport Park and historic Southport Beach House.
In keeping with the vision and goals set forth in the SPMP, the Association Board of Directors (BOD) formulated an initial strategic plan for implementation of the improvements to the Southport Beach House and the Southport Park. In 2017 the Association identified challenges and opportunities that would be significant factors in realizing the envisioned goals of the SPMP and adopted an initial strategic plan to that end.
Phases 1-3 were completed by 2021 and phase 4 is currently underway. The Southport Park Association is working with the City of Kenosha to develop plans for ongoing uses of the Beach House upon completion of the exterior improvements. Our Utilization and Design Recommendations include interior layout and design upgrades intended to expand public programming and access on a continuous basis.
SPA has held a number of events over the past several years, focused on raising
community awareness of the progress that is underway at the park. We have organized
public informational meetings with the neighborhood adjacent to the park, as well as
environmental stewardship and historic preservation educational programs with children
from the Kenosha Unified School District, in partnership with the WATERshed program.
We have also held spring and fall flower sales, as well as onsite fundraising events at
the Southport Beach House. Yoga and Friends partnered with the Southport Park
Association to offer weekly sunrise and sunset yoga classes in the historic beach house.
Over the past 3 summers, we have teamed up with the Kenosha Harbor Market and the
Bradford High School football team in the operation of a free Bike Valet service for
visitors to Kenosha’s lakefront.

Board of directors
as of 11/28/2022
SOURCE: Self-reported by organization
Board co-chair