Hack the Hood empowers under-resourced youth of color with knowledge, skills, and relationships needed to succeed in tech careers. Through mentorship, culturally-relevant knowledge, 21st-century skills, and community partnerships, we believe youth can become creators of change in their communities.

Our current evaluation system relies on survey responses, and we focus these efforts on our direct service in Oakland. 72% of Oakland youth surveyed responded. This include youth enrolled in programs in Oakland from April 2016 to April 2017 (which includes enrollments from Bootcamp Summer 2016, Membership Jan-Mar 2017, Bootcamp Spring 2017)

Over 60% of our youth were high school student during our programming. All youth we continue to track have either graduated or persist in high school. We continue to serve many of these youth through after school programs and coaching, as well as helping connect to tutoring and college scholarship opportunities.

Student Services and Organizations (B80)

Hack the Hood connects low-income young people of color and local small businesses through technology, in order to create opportunities for all the people who live in the Bay Area, and beyond, to take part in and lead the change that is happening around them.
Our programs model the change we wish to see in the world, equipping youth with a toolbox of skills, confidence, and connections to help them flourish in any career that they choose and support partners in doing this work.
Hack the Hood's programs are geared to low-income youth of color ages 16-25 whom are under-represented in the Tech industry and who face significant barriers. Examples of barriers include poverty, racial bias, history of trauma or experiencing/witnessing violence, attending schools with limited funding and opportunities, involvement in the foster care system, lack of mentorship or professional role models, and low-levels of general economic opportunities in their community.

This 8-week, 200-hour intensive experience mimics the work environment of a small web design firm where cohorts of 20 youth design and build websites for small business clients from their own community. In addition to hands-on learning, youth develop an online portfolio and LinkedIn profile, undergo 40 hours of technical, marketing, and soft skills workshops; develop their portfolio; start career planning; gain access to guest speakers and field trips to companies like Google and Facebook; and meet professionals in the field.

Hack the Hood provides service learning and leadership development opportunities for diverse young technology professionals at the beginning of their career. Technical Fellows spend 4 months with Hack the Hood as a cohort, learning, teaching, and helping shape the curriculum. Fellows train together, then are placed at Hack the Hood partner sites as bootcamp instructors, where they teach web development and coding skills to low-income youth of color.

In addition to direct service, Hack the Hood trains and supports other non-profits to replicate Hack the Hood in their community. We offer these partners curriculum and tools, Instructor training, marketing and funding support, instructor recruitment support, mentor training and recruitment, field trip coordination, evaluation services, a community of practitioners and more.

Evaluated via the Impact Genome Project (2019) 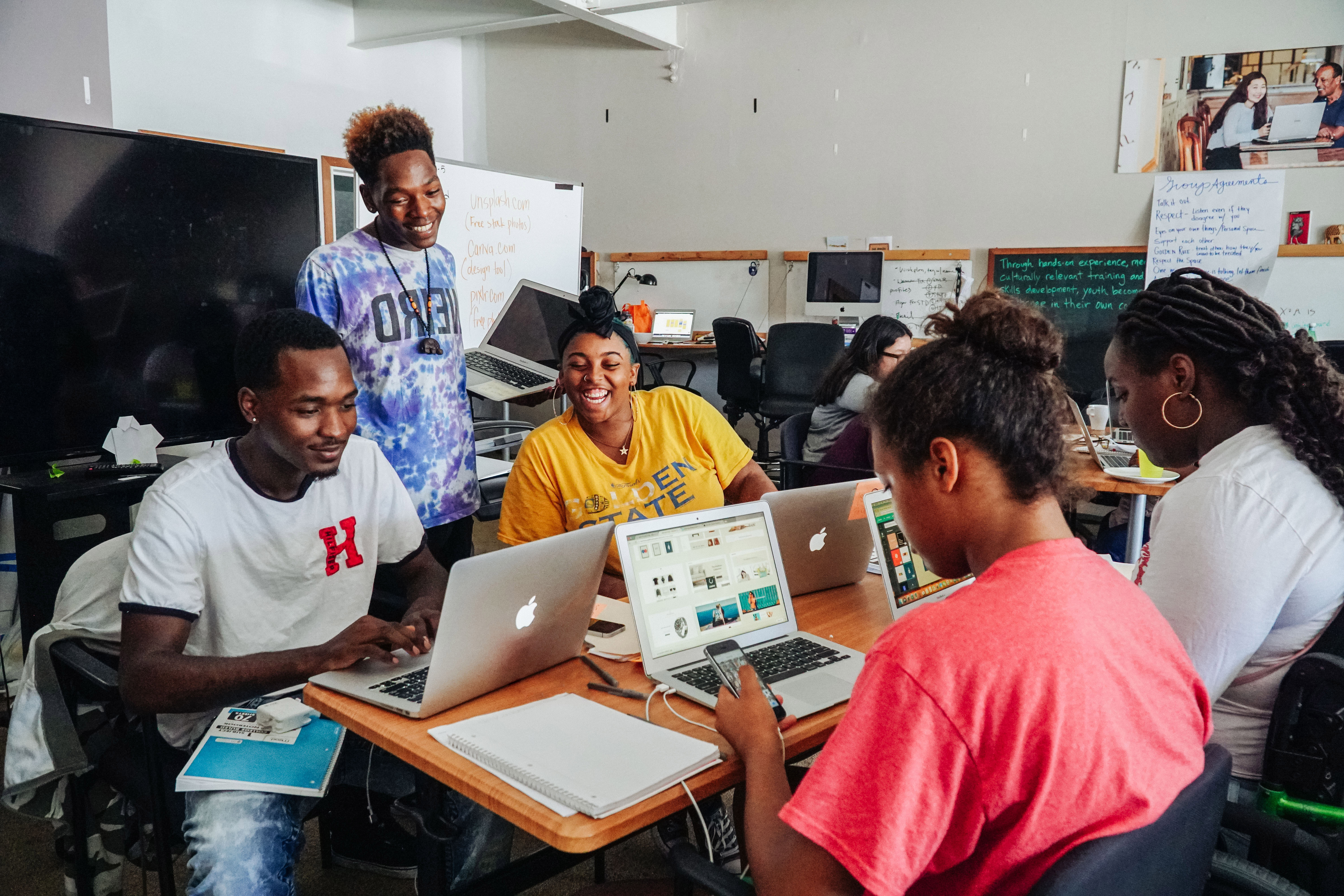 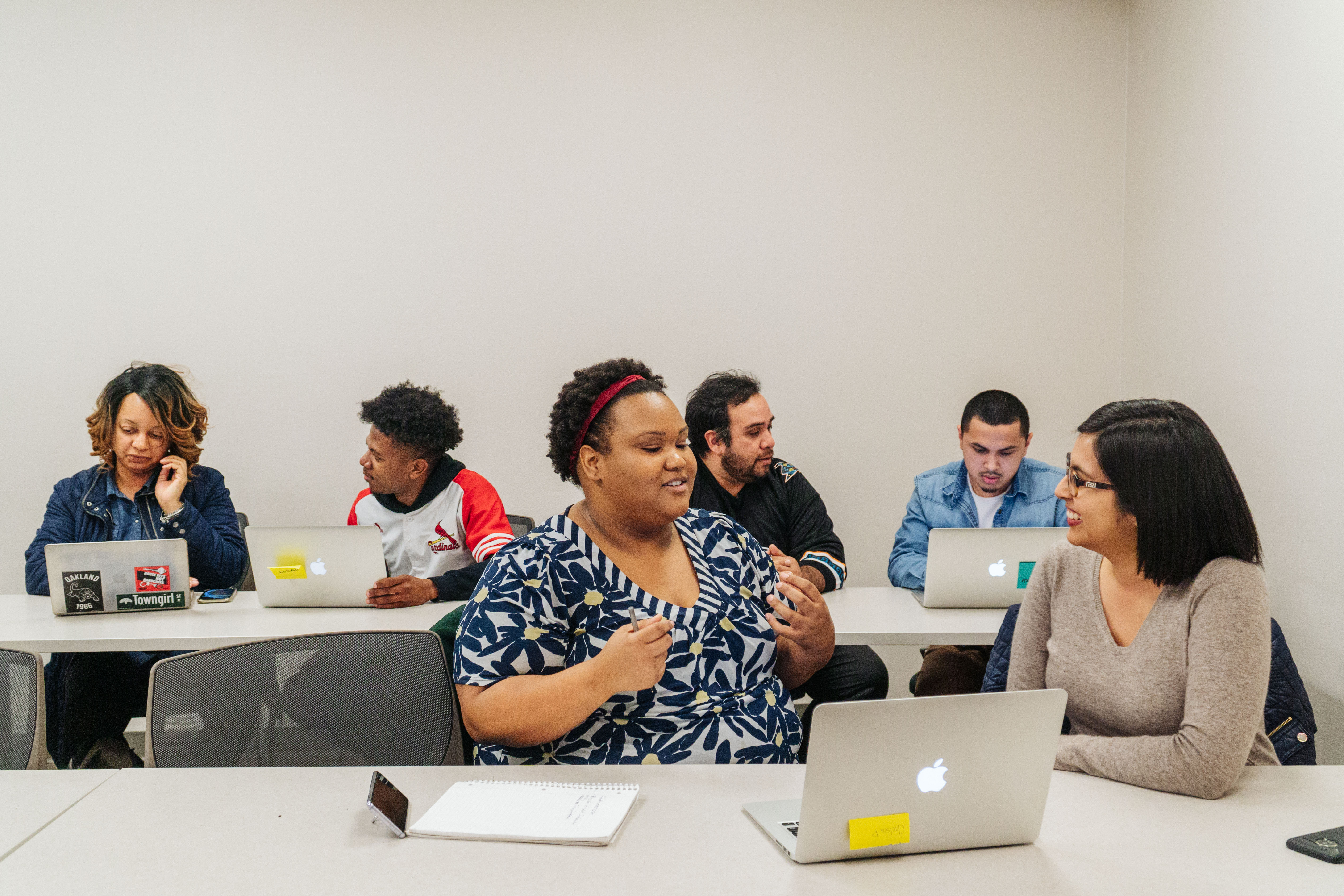 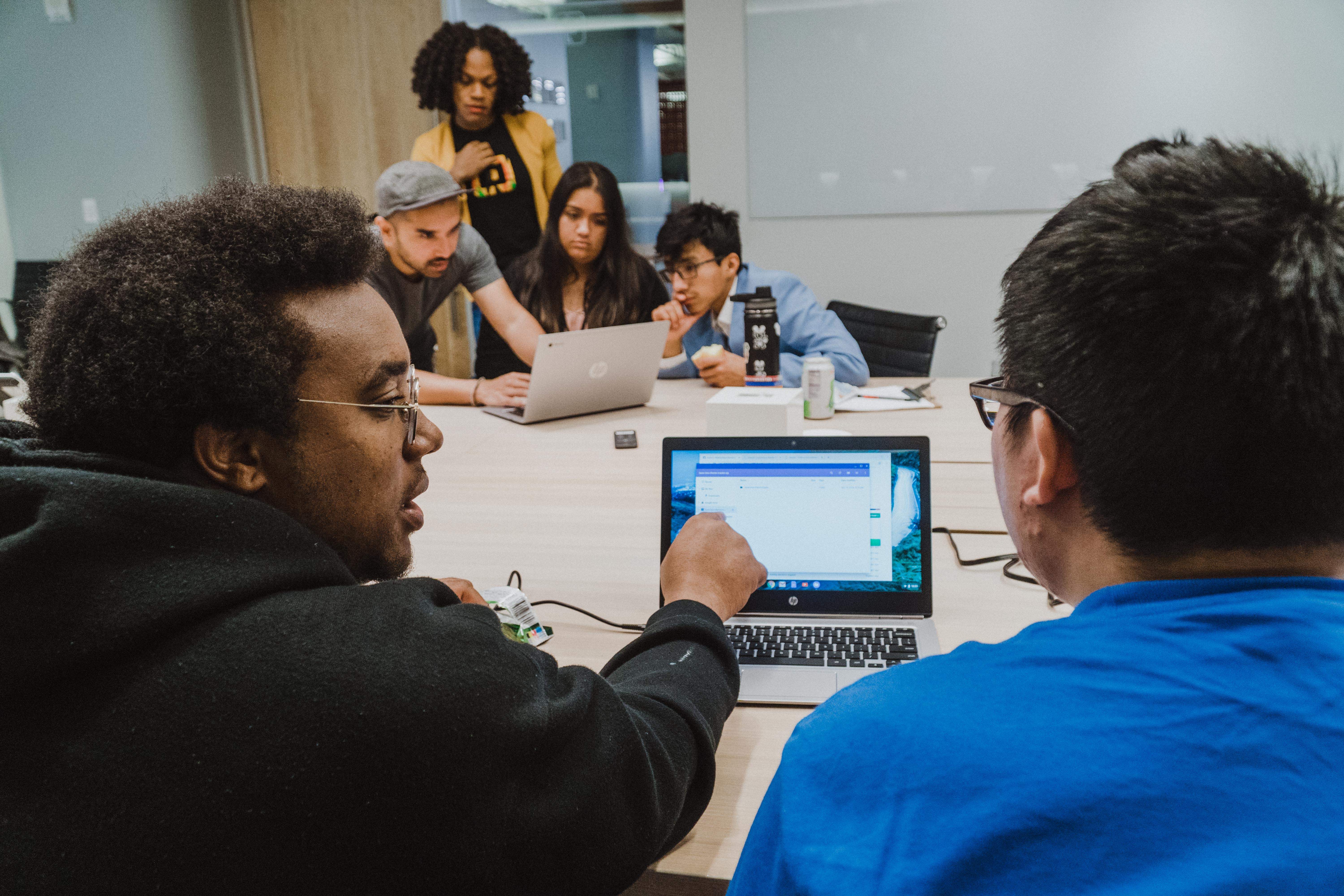 Summer 2019 Bootcamp students at a business trip to Square 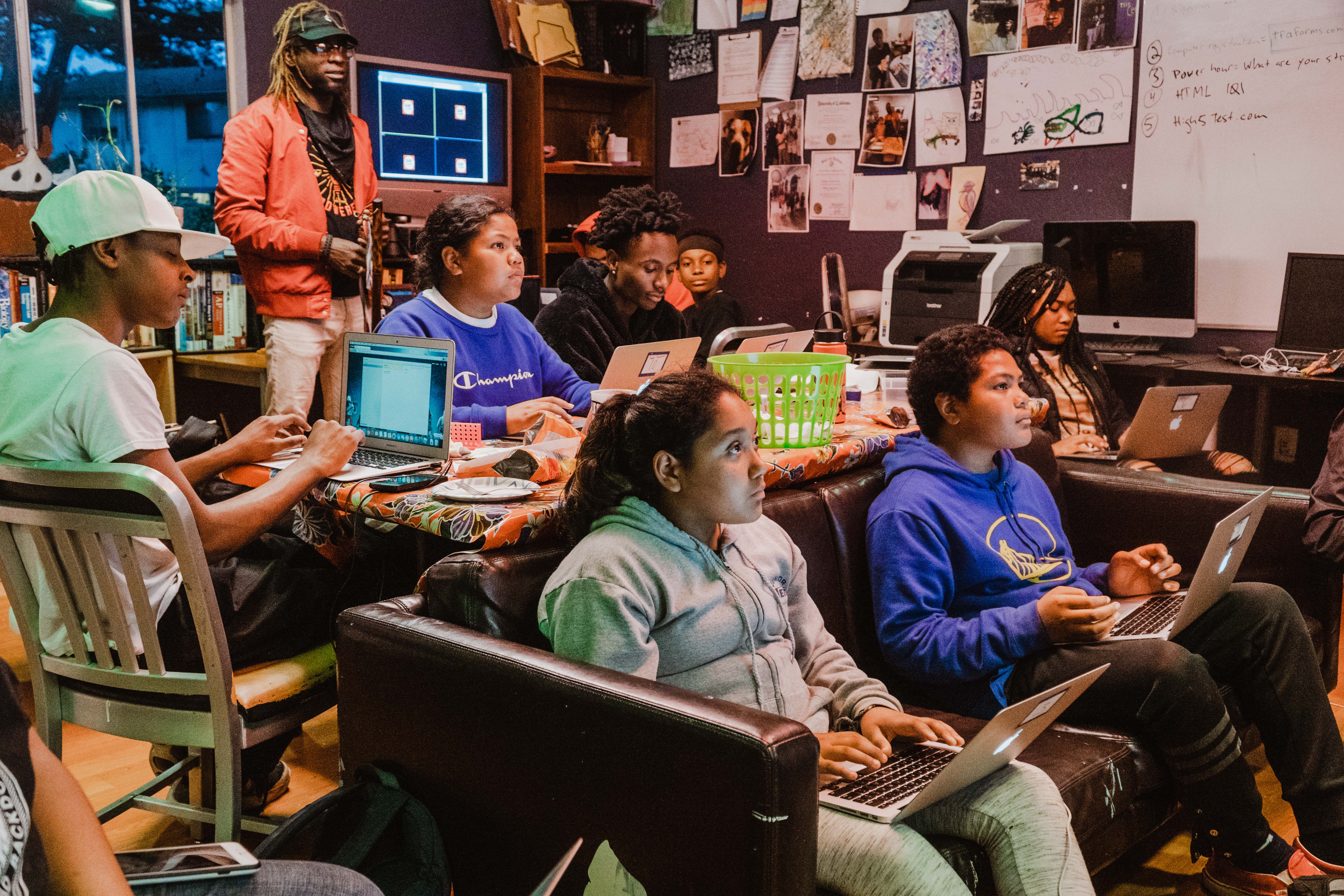 Fall 2019 program with our partners at Alameda Point Collaborative

Technology skills and literacy are fundamental to professional success in the 21st century, yet our school system has failed to equip young low-income 16 to 24 years old youth of color, and especially foster youth, with the skills and knowledge they'll need to enter careers in the tech industry, or technology roles in other industries.
Hack the Hood started in 2012 when we received Google Ventures funding for a pilot program to engage adult volunteers to improve the web presence of 75 small, local businesses in low-income neighborhoods. In 2013, we launched our first 6-week summer boot camp for youth with a three-year grant secured from the City of Oakland. In that first summer, 18 youth built 65 websites for small businesses. We applied for the 2014 Google Bay Area Impact Challenge and were selected as a finalist out of 1,000 applicants, and ultimately as a winner of the online voting challenge which drew almost 200,000 voters from around the globe, resulting in a $500,000 award from Google.

The highly visible Google Challenge springboarded Hack the Hood's efforts to codify and replicate our bootcamp model in partnership with on-the-ground partners outside of Oakland. In 2015 we piloted our train-the-trainer model with 3 partners who replicated our bootcamp in their communities: Richmond, East Palo Alto, and Watsonville, CA. In 2016, we expanded our train the trainer footprint across Northern California, working with 10 organizations to replicate Hack the Hood bootcamps in San Francisco, East Palo Alto, San Jose, Gilroy, Merced, Modesto, and Watsonville. Partners included: TeenForce and Silicon Valley Children's Fund, Project YES, Empower, Digital NEST, Bayview Hunters Point YMCA, Boys & Girls Club of the Peninsula, Collective Impact, and the Vietnamese Youth Development Center. In the Fall of 2016 we launched the pilot of our year-round Membership program, and starting in 2017, we will start to distribute the year-round model through the same network of partners.

To date, Hack the Hood bootcamps and workshops have trained over 600 youth to build websites for over 650 small local businesses. Our evaluation framework was designed by Rockman Associates and Public Profit to measure program engagement and effectiveness of our model in changing education and career outcomes for youth. We measure six specific areas of youth achievement and development:
Mastery of technical and soft skills
Success in professional environments
Confidence and efficacy of control, including goal-setting
Persistence in education and training,
Increase in income
Navigational capital: ability to network and navigate the tech ecosystem.

We use the following strategies:

1) Real-world, project-based learning - in our bootcamps, youth build actual websites for small business owners in their community, then go on to study coding, digital marketing, and social entrepreneurship before moving into college, an alternative certification program, or a job.

2) Culturally-competent curriculum and staff with high engagement with youth: 92% of all enrolled youth complete our programs.,

3) Career Exposure- we introduce youth to tech professionals working at top tech companies, as well as taking youth to company campuses so they can witness first hand the work environment and provide internships/apprenticeships and coaching

Many tech-inclusion programs provide fun enrichment-level dosage (hackathons, week-long camps) to middle-class youth of color or girls who are already on the path to college. Hack the Hood is built from the ground up to meet the intense needs of Low-Income Youth of Color, including a high percentage of youth who have experienced violence, systemic racism, and other forms of trauma. Our approach is holistic, rooted in community, relationship-driven, and trauma-informed. We follow youth development principles, draw on both the local business and tech communities to provide opportunities and inspiration for youth. We offer real experiences, and youth develop real portfolios. We sustain contact with youth for years after they graduate to provide advanced training, referrals, coaching, mentoring, moral support, and community- whatever it takes to help them achieve their goals.

Our process is also innovative. We have commissioned User Centered Design Research to ensure our approach is well matched to the needs of our youth and we use the Community Cultural Wealth framework to guide our approach. Our organization very much resembles a start-up culture where we pilot, test, and iterate our program design to arrive at the best possible solution to meet the ever-evolving landscape of our youths' needs. Finally, our approach to scaling is somewhat unique in that we partner intensely with existing on-the-ground partners who get training, curriculum, technical assistance, marketing support, evaluation services, and funding from us to replicate our program. This means that local relationships, knowledge, and expertise always inform each implementation of our bootcamp.
The Hack the Hood approach, programs and community are having a positive and powerful impact on the young people and the small business communities that we work with. Going forward we see our mission evolving to not only support young people in the Bay area and nearby, but to also provide a program and framework so the Hack the Hood bootcamp can have a transformative impact on more youth.

Since 2014, we have worked with more than 500 youth ages 16-25 in in-depth programs, and served more than 550 small business owners, many on the other side of the digital divide as well. We have scaled to work with 9 partners in 5 cities other than Oakland (San Francisco , Modesto, Merced, East Palo Alto, San Jose, Watsonville, Richmond), and have created strong pathways for our participants to move from our Bootcamps into other classes and programs we offer, along with individualized 1:1 coaching and support. Since January 2017, 344 youth have been served across 22 programs in Oakland and with 6 partners in San Francisco (Collective Impact, Bayview-Hunter's Point YMCA), San Jose (Teenforce), East Palo Alto (Boys & Girls Club of the Peninsula), Modesto (Project YES) and Merced (Empower).
Technical Skills
Students were asked to rate their level of skill & knowledge related to website building, principles of web design, coding languages.
90% increased skill in building websites
88% increased knowledge of web design principles
78% increased knowledge of coding languages

> 83% of our participants remain in or enroll in school; 60% continue to remain involved with our programs after an initial exposure

Board of directors
as of 4/5/2021
SOURCE: Self-reported by organization
Board co-chair