Led by people of color, immigrants and refugees, rural communities, and people experiencing poverty, we work across Oregon to build a unified intercultural movement for justice.

Unite Oregon represents the merger of two strong organizations – Center for Intercultural Organizing (CIO) and Oregon Action (OA) – who together have decades of experience organizing immigrants, refugees, people of color, and low-income Oregonians to address racial and economic disparities and improve quality of life in our state.

Over the years, we have found that state's population of largely urban and suburban immigrants, refugees, and people of color have a great deal in common with low-income rural communities—a growing economic inequality and lack of access to opportunity. However, urban models of community organizing do not easily translate to rural communities, and deep differences in language, culture, and world-view exist, keeping potential allies from working together for solutions. Having collaborated for over ten years, Center for Intercultural Organizing and Oregon Action decided to join forces to stem and reverse this tide, and act in concert on issues of joint concern through a strategic merger.

History of Center for Intercultural Organizing (2003-2015)
Founded by Portland-area immigrants and refugees, the Center for Intercultural Organizing (CIO) was originally established to combat widespread anti-Muslim sentiment after 9/11. In subsequent years, CIO continued organizing against the targeting and profiling of Muslims and other groups, while broadening its focus toward building power in immigrant and refugee communities through community education, civic engagement and policy advocacy, organizing and mobilization, and intergenerational leadership development. CIO engaged thousands of individuals from diverse cultural, ethnic, and religious backgrounds, trained hundreds of immigrant and refugee community leaders, and led dozens of successful issue campaigns.

By building one inclusive, effective organization comprised of members in both rural communities and urban/suburban communities, Unite Oregon will have even greater power to impact policies that uplift all communities struggling for justice. Oregonians will be better positioned to find commonalities across differences of language, culture, and geography, and work collaboratively for change.

Unite Oregon develops new leaders through signature leadership development programs, through strategic trainings, and through on-the-ground leadership positions within our organization and programs.

STRUCTURED PROGRAMS
Our leadership development programs are aimed at building the skills of those most likely to be excluded from mainstream opportunities: immigrants, refugees, and people of color.

PILOT Goals:
- Support individual leaders from various cultural backgrounds to build a shared analysis for organizing;
- Strengthen the capacity of immigrants and refugees to build power for their communities through in-depth skill building, leadership development and mentoring;
- Develop a long-term multi-ethnic coalition of immigrant and refugee leaders who can work together on issues of joint concern in Oregon.

Over the course of a year, participants convene quarterly for weekend trainings, where they participate in multilingual workshops such as: introduction to community organizing; politics of oppression; power analysis; cross-cultural community movement building; conflict resolution; base-building; media strategy and more. Additional gatherings are held throughout the year. During PILOT, participants also put their training into practice through hands-on projects.

WASHINGTON COUNTY
Beaverton Organizing and Leadership Development (BOLD)
In partnership with the City of Beaverton, Unite Oregon annually provides a leadership development program for emerging immigrant and refugee leaders and leaders of color. The BOLD Program centers around three goals: growing new leaders, building cross-cultural relationships, and laying the groundwork for civic engagement. Unite Oregon is working with a consortium of funders to bring this unique program to the entire county.

ROGUE VALLEY
Rogue Valley’s Immigrant Justice Committee is currently developing a structured program (slated for 2017) for rural Latinos modeled after PILOT and BOLD, and our staff have done a significant amount of crosschapter training on curriculum. Our Rogue Valley chapter currently provides leadership development opportunities through positions on the Chapter Leadership Council, through active field work, and through one-on-one mentorship and support. 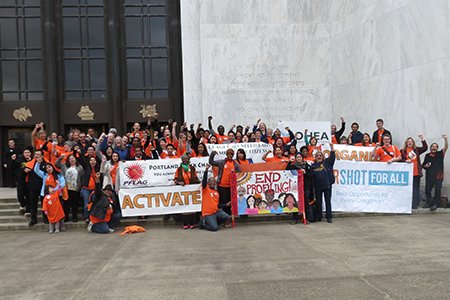 Unite Oregon at the State Capitol 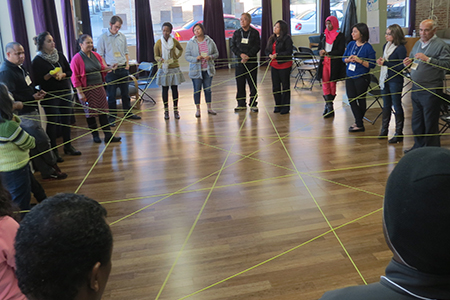 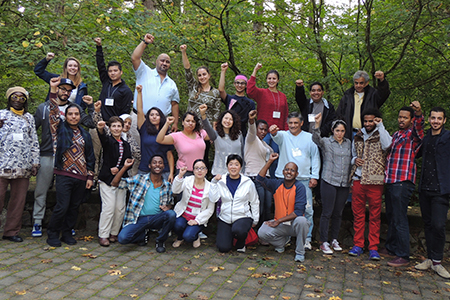 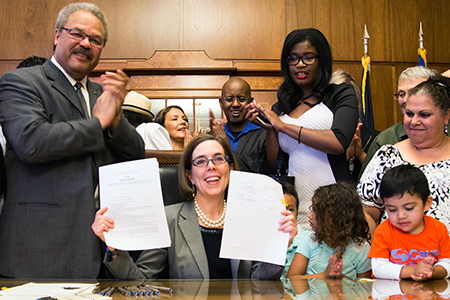 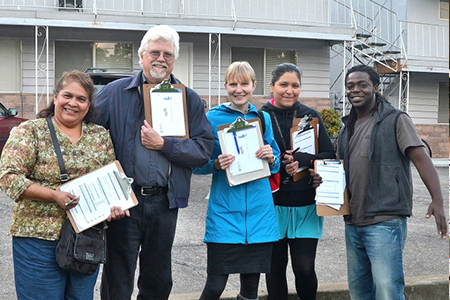 GOAL I - BUILD: Unite Oregon is a statewide, multiracial multicultural organization with diversified, stable funding, a constituency-based staff, and an engaged board able to effect change for the long haul.

GOAL III - ACTIVATE: Unite Oregon mobilizes its base to impact the issues that most affect our constituents, making concrete improvements in their lives.

GOAL I - BUILD: Unite Oregon is a statewide, multiracial multicultural organization with diversified, stable funding, a constituency-based staff, and an engaged board able to effect change for the long haul.

Strategies and Action Steps
1. Increase funding from individuals, businesses, grassroots community members, and major donors
2. Increase the linguistic and cultural diversity of Unite Oregon's staff so as to better reflect and serve our grassroots base
3. Recruit, support and retain constituent Board members with an emphasis on immigrants, refugees, and people of color
4. Create an Executive Director succession plan
5. Build our offices, chapters, and resources within the communities where our constituents live

GOAL III - ACTIVATE: Unite Oregon mobilizes its base to impact the issues that most affect our constituents, making concrete improvements in their lives.

GOAL III - ACTIVATE: Unite Oregon mobilizes its base to impact the issues that most affect our constituents, making concrete improvements in their lives.
- Unite Oregon plays a leadership role in issues of health equity, racial justice, and human rights on a local and state level, and serves at several national tables on these issues
- Has had major public policy wins in local jurisdictions and at the Oregon State Capitol over the past several years
- Unite Oregon members lead and participate in all aspects of our public policy campaigns
- Able to share our multicultural perspective through membership in 15 coalitions working on local, statewide and national and refugee issues

GOAL I - BUILD: Unite Oregon is a statewide, multiracial multicultural organization with diversified, stable funding, a constituency-based staff, and an engaged board able to effect change for the long haul.
Progress:
- Budget increased from just over $1,000,000 in 2015 to $1,265,000 in 2016
- Expanded to three fully staffed and member-supported chapters: Multnomah County, Washington County, and Rogue Valley
- Recruited Leadership Council members from among our member leaders and constituency in all three state chapters
- Increased membership and created infrastructure to better support our members and involve them in Unite Oregon's work

GOAL I - BUILD: Unite Oregon is a statewide, multiracial multicultural organization with diversified, stable funding, a constituency-based staff, and an engaged board able to effect change for the long haul.
Progress:
- Placed immigrant and refugee leaders on boards and commissions in Washington County, Beaverton, Portland, Mulnomah County, Jackson County and Oregon State
- In addition to winning a number of social justice initiatives in local cities and counties, Unite Oregon has been a lead organization or partner on many successful state policy campaigns over the past several legislative sessions, including passing a ban on profiling by law enforcement, improving English Language Learner (ELL) programs, earning paid sick days for Oregon employees, raising the minimum wage, securing basic health, and more (visitwww.uniteoregon.org/policy_advocacy for recent successes).
In 2013, CIO and its partners won paid sick days (Portland), cultural competency in health care (State of Oregon), racial impact statements legislation (State of Oregon), tuition equity (State of Oregon), better data collection for ethnic minorities (State of Oregon), ending Section 8 discrimination (State of Oregon) a permanent diversity commission (City of Beaverton) and more
- Unite Oregon receives mention in local, state and national media, including web links and online stories, on a weekly basis
- Unite Oregon staff and Board members have spoken at over 50 events in the past year alone

Board of directors
as of 05/05/2020
SOURCE: Self-reported by organization
Board chair