QWOCMAP uses film to shatter stereotypes and bias, reveal the lived truths of inequality, and build understanding and community around art and social justice. QWOCMAP creates, exhibits, and distributes high-impact films that authentically reflect the lives of queer women of color (cisgender & transgender), and gender nonbinary and transgender people of color (of any orientation), and address the vital, intersecting social justice issues that concern multiple communities.

Film is an extremely powerful medium that shapes narratives and societal perspectives. Yet the film industry is dominated by cisgender, heterosexual white men. Major academic studies prove that this inequity results in film depictions of historically marginalized communities that are extremely limited and often destructively stereotypical. When we are depicted, queer women of color, and gender nonbinary and transgender people of color are shown as deserving insulting jokes, hate speech, and graphic violence. Studies also demonstrate that these reflections of how the world sees us, impacts how it treats us, and shapes how we see ourselves. However, film can also transform by giving voice to the unheard and forcibly silenced. Due to the high price of film training and the exorbitant cost of filmmaking, few in our community can access it.

QWOCMAP tailors programs to meet the needs of specific segments of our multi-racial, pan-ethnic LBTQ people of color population, which in turn expands participation and amplifies impact. We partner with other organizations that have significant complementary expertise and experience in serving our intersecting communities.

QWOCMAP is the only organization in the nation, and the first of four such organizations in the world, that specifically serves queer women of color, and gender nonbinary and transgender people of color through filmmaking. QWOCMAP has expanded gender and racial equity in the film industry by launching the careers of 350+ filmmakers.

Our Filmmaker Training Program equips our community with the concrete technical skills, practical artistic knowledge, and tangible leadership tools to create new films that address interconnected social justice issues. It provides rigorous professional training, along with filmmaking equipment, intensive coaching, and learning and career resources without cost to participants. It combines hands-on practice with industry standard equipment and interactive technical lectures that cover the entire filmmaking process from story development and cinematography, to editing and film distribution. Its proven, award-winning curriculum demystifies filmmaking in a safe, supportive, collaborative, and fun environment. Finally, it provides invaluable production experience so that each participant emerges as a filmmaker with a new film to their name, which is a major accomplishment in the male-dominated film industry. It offers additional learning and work opportunities for participants through QWOCMAP Productions, which provides videography, production and editing services to nonprofit, foundation, and artist clients. In addition, this intensive investment launches new careers that build the capacity, resilience, and economic viability of our community.

Since 2000, our award-winning Filmmaker Training Program has nurtured the creation of 425 films, leading both U.S. and global production of films created by our community. QWOCMAP Filmmakers report high qualitative scores for self-efficacy and agency and high quantitative scores for filmmaking skills and knowledge development. Many have gone on to successfully complete highly competitive, premier graduate film programs at the USC School of Cinematic Arts, UCLA, Temple, San Francisco State University, and UC Santa Cruz. They are leaders at organizations like NBCUniversal, Pandora, Google, and the ACLU, and in sectors from education and philanthropy, to the arts and electoral politics, with a run for the San Francisco Board of Supervisors.

In 2012, in response to a multi-year-long waiting list and workshop requests from Egypt and Uganda to China and Thailand, QWOCMAP redesigned the Filmmaker Training Program to tour across California and the U.S. That year, we conducted a workshop for Two Spirit Dine’ women in Gallup, near the Navajo Nation capital of Window Rock, New Mexico. In 2015, QWOCMAP conducted our first international Spanish-language cross-border filmmaking workshop in Tijuana, Mexico.

Our long-term partnership with Bay Area American Indian Two Spirits (BAAITS) resulted in a 2009 focus on Two Spirits in our Filmmaker Training Program, which drove attendance when these films world-premiered at our 2010 Queer Women of Color Film Festival, and developed subsequent interest in our Distribution Program. It also increased overall Two Spirit participation in our programs, which at 10% is proportionately higher than U.S. Census figures for the Bay Area at 0.5 to 1.0% Native American. In 2017, we partnered with BAAITS again and now have the largest catalog of Two Spirit films in existence.

The FREE annual 3-day Queer Women of Color Film Festival serves approximately 2,500 people each year and is the largest event of its kind.

QWOCMAP presents its free annual Queer Women of Color Film Festival in San Francisco every June. The largest event of its kind, it has world-premiered 500+ films by queer women of color, and gender variant and transgender people of color filmmakers from across the globe. Audiences of 14,000+ have traveled from across the U.S., and countries from Turkey to Japan for deep audience engagement and public discussions that connect filmmakers and their films to social issues, grassroots organizations and social justice movements. QWOCMAP has worked with 100+ Community Partners to spark awareness and galvanize collective action through intentional practices that foster welcome, safety, and inclusion. The Film Festival has been lauded as “the most diverse of any arts event in San Francisco,” and the “gold standard for accessibility,” due to its services for Deaf & Hard-of-Hearing people, community childcare, fragrance-free seating, Crisis Counselors, and other free resources. One foundation program officer noted that in comparison to other artist talks, audience discussions at the Queer Women of Color Film Festival are a profound learning experience that provoked deep understanding of both the films and their makers.

The Distribution Program links films by, for and about queer women of color, gender nonconforming and transgender people of color to international audiences of over 5,000 annually, who yearn to see these experiences authentically represented. 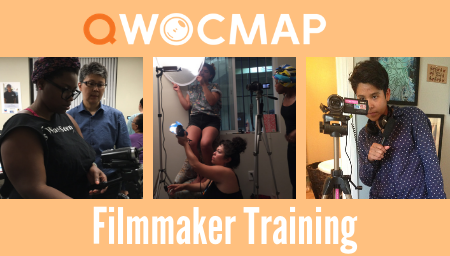 play_circle_outline
QWOCMAP Behind The Lens campaign

Number of participants who would recommend program to others

The program has succeed and grown through word of mouth in the community. We do little advertisement. Most new participants know of previous participants who have completed films through the program.

This includes the number of participants for each year of the program. In 2012, we changed our model, reducing participant numbers & increasing international reach and film production quality.

Participants can complete films as individuals, pairs, or groups. 2013 was the year we conducted workshops based on our old model and our new model.

Since 2007, Community Partners are matched to films and communities represented in the films to spark individual awareness, galvanize collective action, and promote civic engagement.

QWOCMAP is an artist-activist run organization that nurtures the leadership of queer women of color (cisgender and transgender), and gender nonbinary and transgender people of color (of any orientation) to create films that will foster broad cultural and political impact. We screen films to increase awareness and deepen public engagement. We distribute films to create strong movements that will lead to lasting change and social justice. QWOCMAP's vision nurtures our community to become leaders that incorporate the power of art as cultural resistance, cultural resilience, and cultural renewal.

Our goal is to see the media enriched and transformed by the films of queer women of color (cisgender and transgender), gender nonbinary transgender people of color (of any orientation), and that these films fuel social justice movements and create lasting change.

QWOCMAP is deeply rooted in our community, and our 100% of our staff, Board, and Advisory Board come from the community we serve. They have decades-long careers in filmmaking and fields from fundraising to law, and expansive activist history in social movements, from anti-Apartheid to reproductive justice. As a result, QWOCMAP has the culturally competent expertise to serve our community as very few other organizations can. Equity and justice are the root of everything we do, from conducting filmmaking workshops that examine how shot sizes can convey stereotypes or truths about marginalized communities, to films and discussions that reframe human migration in support of equitable and just immigration policy. We ensure that are our staff and Board are from the communities we serve. We also ask ourselves who is not in the room and act to remove barriers. We build expertise within our organization by supporting leaders from particularly vulnerable segments of our community.

Since 2000, our award-winning Filmmaker Training Program has nurtured the creation of 425 films, leading both U.S. and global production of films created by our community. QWOCMAP Filmmakers report high qualitative scores for self-efficacy and agency and high quantitative scores for filmmaking skills and knowledge development. Many have gone on to successfully complete highly competitive, premier graduate film programs at the USC School of Cinematic Arts, UCLA, Temple, San Francisco State University, and UC Santa Cruz. They are leaders at organizations like NBCUniversal, Pandora, Google, and the ACLU, and in sectors from education and philanthropy, to the arts and electoral politics, with a run for the San Francisco Board of Supervisors.